The Department of Agriculture, Land Reform and Rural Development (DALRRD) wishes to alert local residents and holiday travellers about rabies in high-risk areas in the country.

Click here to view the National Institute for Communicable Diseases (NICD) report about the increase of rabies in humans during October and November 2021.

Rabies is particularly prevalent in Limpopo, Mpumalanga, KwaZulu-Natal and Eastern Cape provinces, as well as the border between South Africa (Free State province) and Lesotho. The coastal areas of KwaZulu-Natal and Eastern Cape are particularly high-risk areas for rabies. The public is advised not to approach or pick up stray dogs and cats from these areas for whatever purpose, and to report such animals to the nearest welfare organisation, SPCA or the police station.

By picking up stray animals and homing them, you could aid the spread of rabies to other areas and provinces and put your life and that of your family at risk. People are encouraged to rather report stray animals to local welfare authorities and to support these organisations in caring for such animals. Remember that rabies may occur anywhere in South Africa and, therefore, avoid handling animals that you do not know.

Rabies is a very serious zoonotic disease, meaning that it can be passed from infected animals to humans. Any mammal can become infected with rabies, but the biggest threat to human health is infected dogs and cats.

The rabies virus is transmitted through the saliva of an infected animal when it bites, scratches or licks a person. Animals that are infected with rabies may show changes in behaviour, but these vary widely from unprovoked attacks to becoming overly friendly or just appearing sleepy.

The infected animals may drool a lot, may not be able to swallow, continuously vocalise (barking, whining, howling, etc.), and sometimes become aggressive or, on the contrary, they may just appear weak and unresponsive.

The disease is fatal because it affects the brain and, once clinical signs become visible, there is no curative treatment. Therefore, if you suspect that you have been exposed to an animal that may have rabies, it is important to wash the wound well with soap under running water and to immediately seek preventative treatment at your nearest healthcare facility. Doing this can save your life! 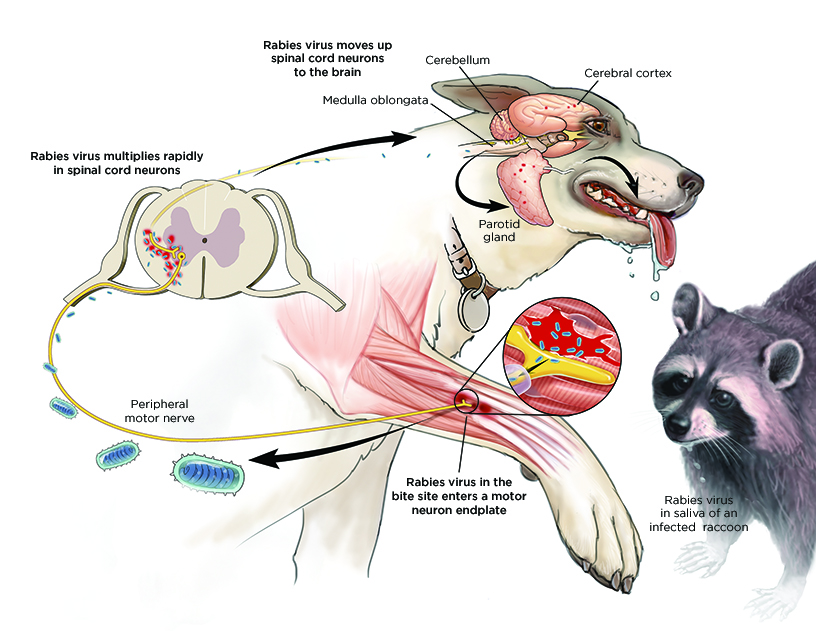